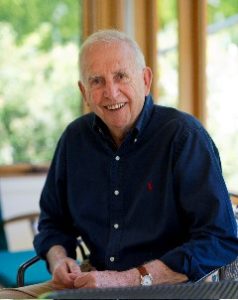 Suicide Prevention Australia is pleased to announce that the 2020 Diego de Leo address will be delivered by Hugh Mackay AO.

Hugh Mackay is  a social psychologist, researcher and bestselling author of 21 books, including What Makes Us Tick, The Good Life and Australia Reimagined. His latest non-fiction book is The Inner Self which will be published in 2020 concurrently with his eighth novel, The Question of Love.

He has had a 60-year career in social research, as well as being a weekly newspaper columnist for over 25 years. Among many honorary appointments he has been:

Mr Mackay is currently a patron of the Asylum Seekers Centre, as well as being a Fellow of the Australian Psychological Society and the Royal Society of NSW. In recognition of his pioneering work in social research, he has been awarded honorary doctorates by Charles Sturt University, Macquarie University, Western Sydney University and the University of Wollongong. He was appointed an Officer of the Order of Australia in 2015.