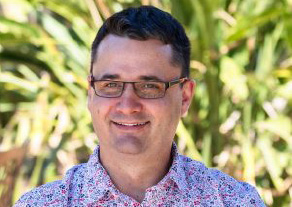 Christopher has been a Non-Executive Director with Suicide Prevention Australia for the last five years. He brings 15 years’ of experience as Chief Executive of non-profit organisations including Lifeline Hobart, United Synergies Ltd, Prince’s Trust Australia, and Bloomhill Cancer Care Ltd. Christopher spent six years as a tertiary VET educator and administrator and has been a Non-executive Director of PeakCare for the last three years.

Leadership programs through the 2007 Tasmania Leaders Program and 2010 Commonwealth Emerging Pacific Leaders Dialogue. Christopher was a regional finalist in 2014 and 2016 for the Queensland AIM Excellence Awards and a state finalist for the 2016 Not for Profit Manager of the Year Awards. He was also a finalist for the 2009 Tasmanian Business Leaders Awards for young manager of the year.