July Member of the Month: The Australian Man Cave

Meet our July Member of the Month: The Australian Man Cave

Our July 2020 member of the month is The Australian Man Cave Support Group.

The Australian Man Cave Support Group is a grass-roots male support network that started out as a conversation in 2017 between two men in Greater Western Sydney. It now stands as a growing National movement of men who care, an all-encompassing group that encourages other men to speak and listen to the concerns of their peers.

TAMC’s focus is on men who suffer with behavioural and abusive problems that can result in behaviours harmful either to themselves or others. 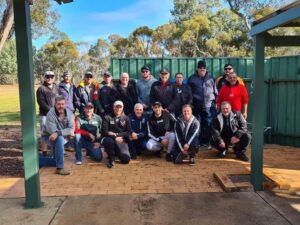 Successful launch of the Griffith Chapter of the Australian Man Cave in June 2020.

Pastor Lou Greco, TAMC Founding Father and President said “We provide men a safe environment to be able to express personal fears, hardships and struggles in their lives without the fear of judgement and members live by the ethos of ‘it’s not weak to speak’.

“We want more men to be part of the growing number of our wider community who want to take an active part in breaking the silence around Suicide Awareness and Prevention,” Pastor Greco said.

Since its inception, TAMC has forged strong community ties across metropolitan, regional, and rural locations and has engaged with males of all backgrounds regardless of age, religion, ethnicity or socio-economic background.

“We connect regularly through activity-based meetings across the state including the successful Pasta making day, the health and nutrition seminar by Knock Out Nutrition and last month’s Salami making masterclass. Over 800 males have joined our online support group and following a tragic number of male suicides in the first half of 2020, we have recently established new TAMC chapters in Griffith and Canberra, with many more in the pipeline.

“We have a major launch coming up in September 2020 where the TAMC will be unveiling some exciting upcoming initiatives and we’ll share the innovative ways we’ve been breaking through the silence whilst re-educating our men to know that it’s not weak to speak, ” Pastor Greco concluded.

Find out more about The Australian Man Cave on their website.